EXPOSED: Auckland Transport is spending $6,200 per household on new cycleways 🚴 💸

Today I'm introducing our new Campaigns Manager, Josh Van Veen. Josh started with us ten days ago, but is already exposing Auckland Council in a way the mainstream media are not. As you'll read below, Josh exposes that the amount Auckland Transport plans to spend on new cycleways equals an incredible $6,200 for every household.

With new rates, mounting debt, Auckland Transport running out of money, and Nanaia Mahuta's plan to steal our "3 Waters" assets, the work of the Ratepayers' Alliance and our mission of Reasonable Rates and Sensible Spending in our Super City has never been more crucial.

I asked Josh to provide some commentary on the Council as he starts in his new role. Here's what he asked me to forward:

The key problem with Auckland Council is that too many decisions are made by unelected bureaucrats without genuine public consultation, leading to tremendous waste, and incompetence that would not be tolerated anywhere else. I know this because I've spent a decade working in the public sector, including for a Council-Controlled Organisation. I decided to leave my role in local government and join the Ratepayers' Alliance because I was fed up with seeing grossly overpaid middle managers run the Council like a corporate playground.

Just how bad is the financial situation at Auckland Council?

In February, officials revealed that Auckland Council's debt has reached $10.5 billion and there is a projected shortfall of $85 million for the 2022/23 financial year. Astonishingly, the word ‘debt’ appeared only once in the public consultation document that went out for feedback in March.

To put Mr Goff's legacy of $10.5 billion of debt in perspective, that is the equivalent of a $21,050 overdraft in the letterbox of every single Auckland household.

Unfortunately, most ratepayers were too busy balancing their household finances to notice the public consultation which passed with almost no media attention. Less than 1% of Aucklanders submitted - and most of those were the boxed-in questionnaire response submissions (which, as we know, the officials prepare to ensure that only those things they want ratepayers to focus on - such as new cycleway - are included.

Councillor Desley Simpson (Ōrākei), who is Phil Goff's Chair of his Finance and Performance Committee, said the 1% result was “pleasing”. I bet it was! This is exactly the kind of fly by night consultation the bureaucrats rely on to get sign off from the politicians. Of course, the mounting debt reflects very poorly on Ms Simpson and Mr Goff's financial stewardship over the last 6 years. 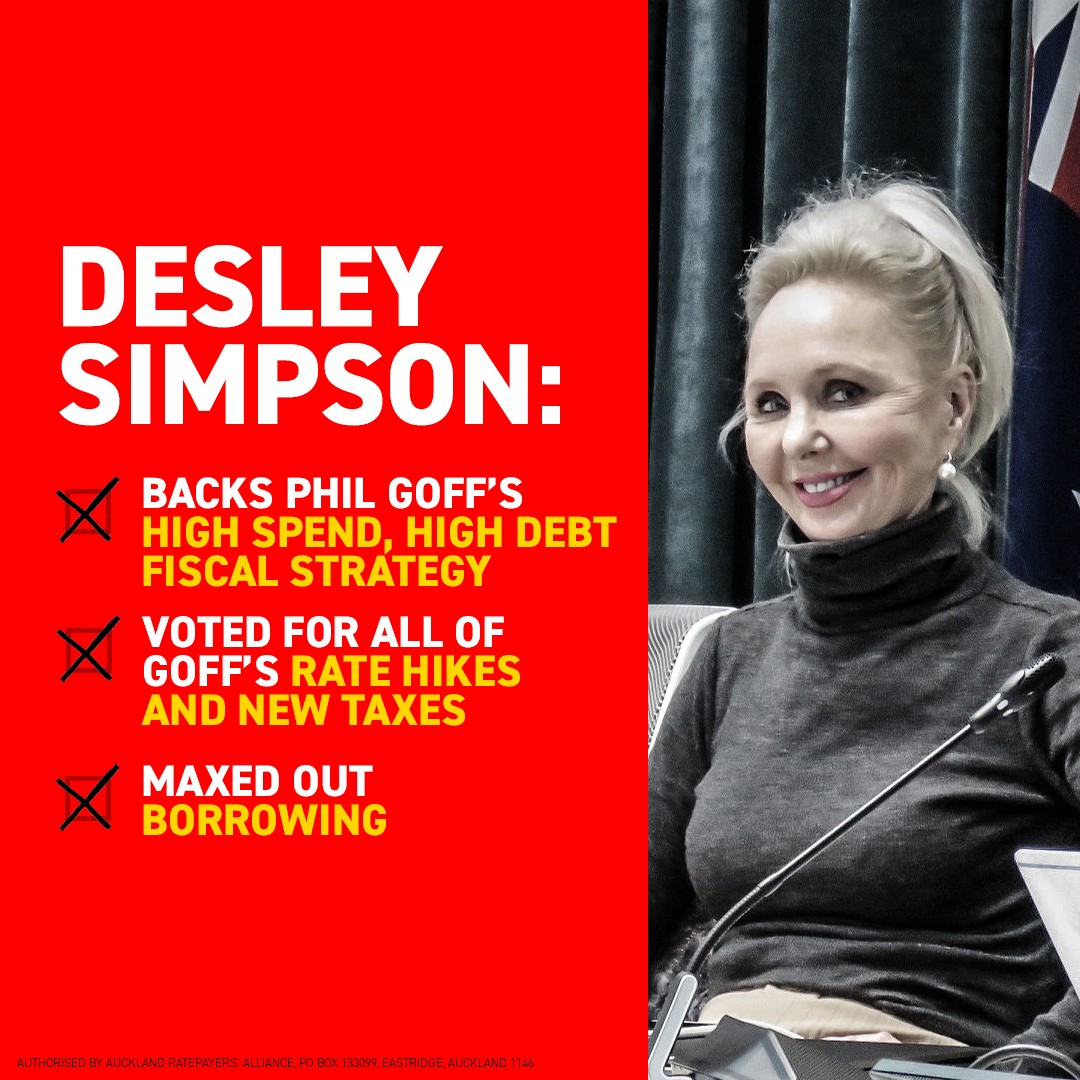 Last week, Councillors endorsed a plan by Auckland Transport that signals spending a further $1.7 billion on new cycleways over the next decade.

The $1.7 billion is in addition to $306 million of funding allocated to cycling last year, and more than $1 billion of projects already underway. In total that adds up to $6,200 per household on cycleways. 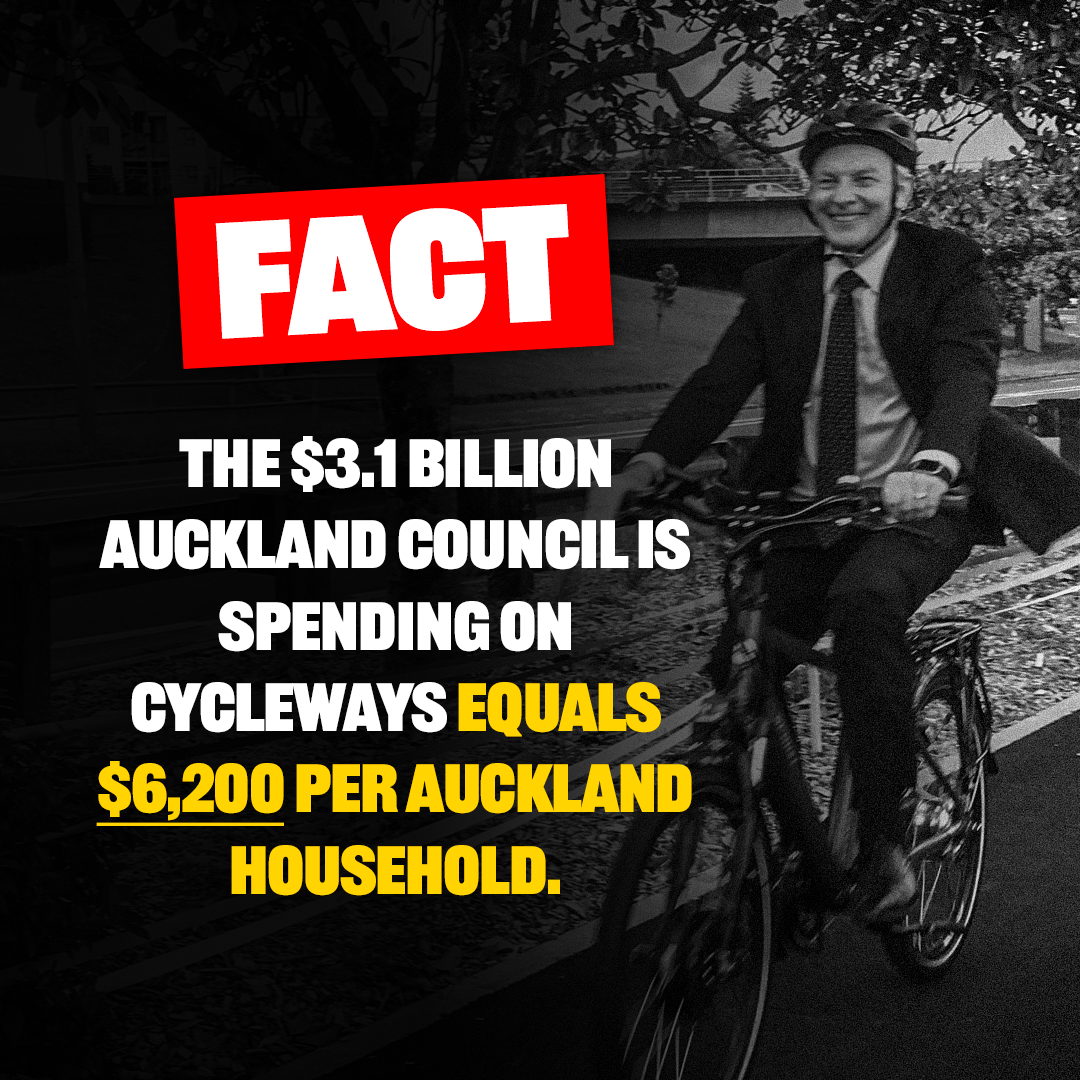 You really couldn't make this up. The spending is unfunded - I was in the room when Mayor Goff literally said "I don't know where the $1.7 billion is going to come from" - but he voted for it anyway!

With this sort of attitude is it any wonder that Auckland Transport is already running out of money and might not be able to maintain public transport at current levels. 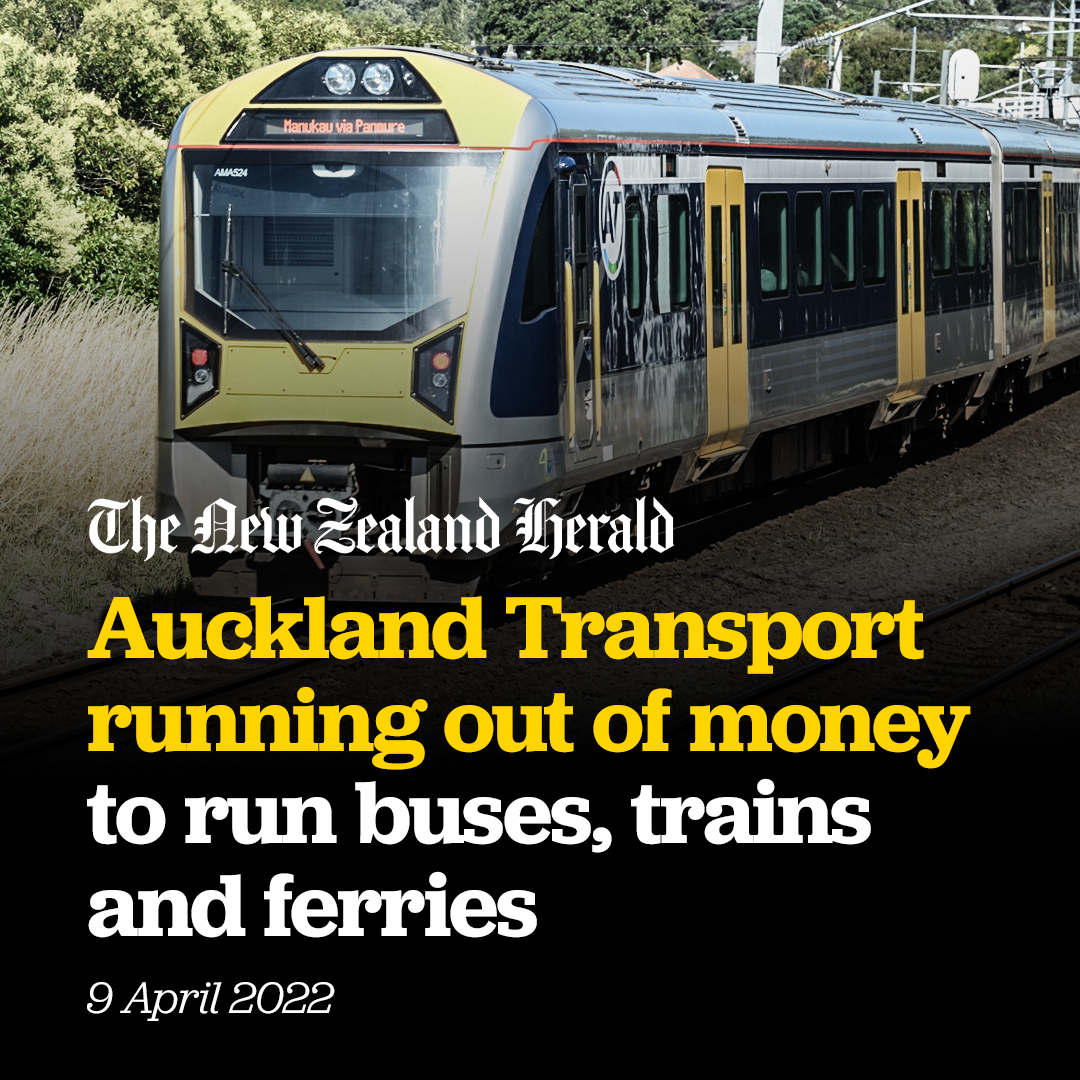 The elephant in the room: just 1% of travel is on a bike

But here's the thing, cycling accounts for just 1% of the distance travelled in Auckland. Even with this massive investment, Auckland Transport expects that number to only increase to 7% by the 2030s (even that is being optimistic). Unlike the Copenhagen dream the cycle advocates sell, Auckland is not flat. It's also spread out.

On Thursday, I spoke to Susie Ferguson on RNZ's Morning Report - I pointed out the plain fact that most Aucklanders don’t want to cycle. 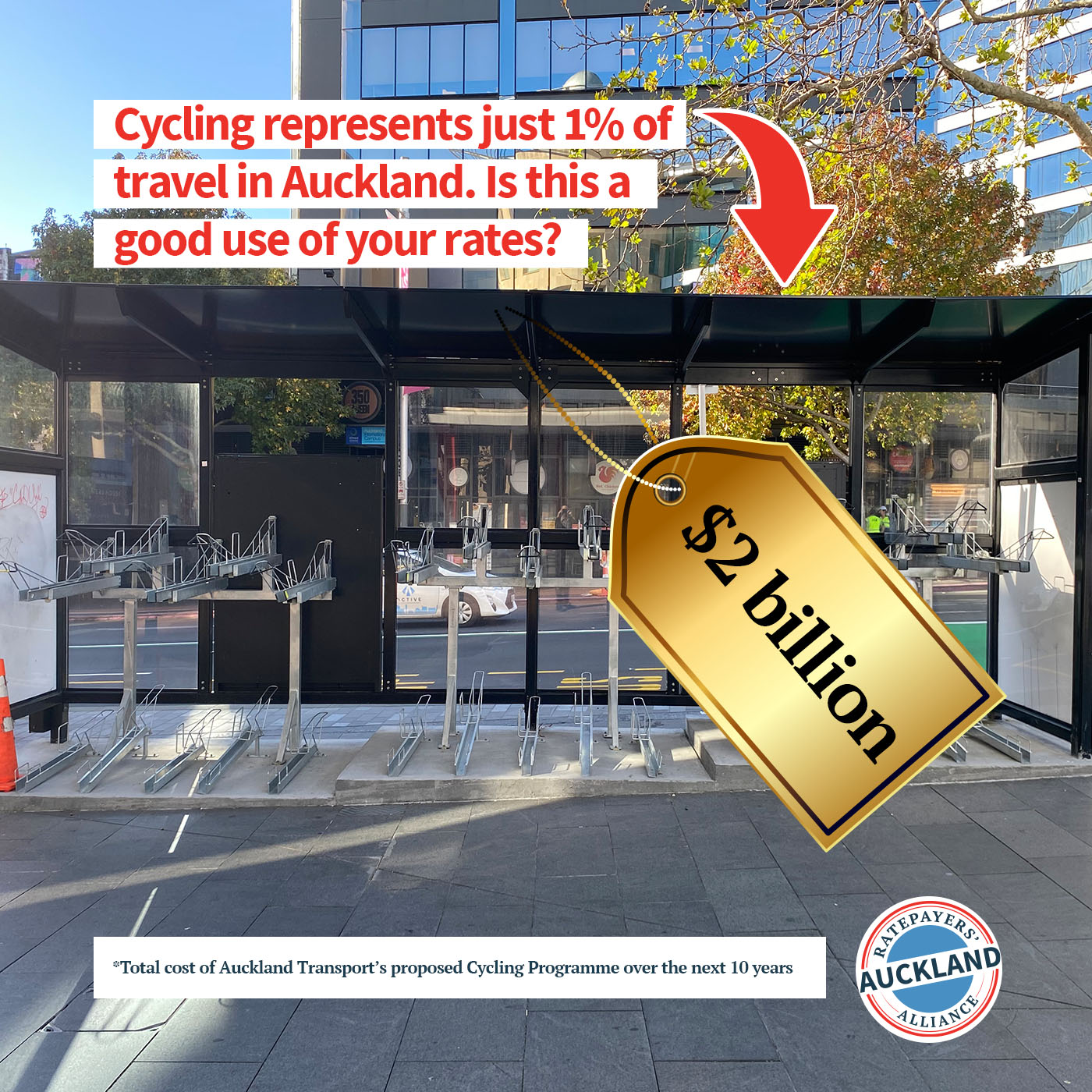 The arrogance of Auckland Transport on display...

As you can see Auckland Council continues to be the poster child of fiscal irresponsibility. But it’s even worse than that. During the Town Hall meeting, we learnt that AT officials deliberately withheld the business case from elected councillors until 8:30pm the night before the $1.7 billion cycle plan vote.

...and the claim from the Mayor that billion dollar "business cases" being voted on don't need to be read by councillors!

But the most extraordinary revelation came when Mayor Goff and Councillor Chris Darby (North Shore), who chairs the Mayor's Planning Committee, reassured their colleagues that it is unusual for elected members to read business cases, as they are ‘technical documents’! Jesus wept.

This blatant attempt to ignore good governance and process was challenged by some councillors, but unfortunately still succeeded. Thirteen councillors voted in favour of the business case without having studied it in detail.

Unlike the Councillors, your humble Ratepayers' Alliance has read the billion dollar business case

Had the Mayor and Councillors read the business case, they would have seen that AT says there is already a $20 billion shortfall in funding for infrastructure. You must ask: if the money isn’t there, why are AT officials spending a fortune on consultants and planning activities for infrastructure that they know there isn't the money to build?

Furthermore, why are they doing it at the expense of the public transport system and roads that Aucklanders actually use? And why are Councillors loading up on projects they know will lead to stratospheric rates increases in years to come?

These are questions we're going to keep asking so long as we continue to have the support of Aucklanders who make our work possible.

The cycleway blowout is just the beginning. In a Council election year, the Ratepayers' Alliance will be working to ensure you know which councillors have consistently voted for big-spending and even higher rates. They can fool some of the people some of the time. But they can’t fool all the people all the time. It's time to reclaim local democracy for Auckland, and I'm looking forward to doing my part to make it happen!