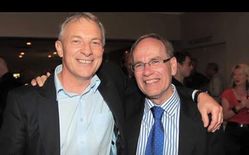 “I will not sign the Ratepayers’ Pledge" said an unequivocal Phil Goff, mayoral candidate for Auckland, during a meeting this morning with myself and Carmel Claridge, spokespersons for the Auckland Ratepayers’ Alliance. The ARA pledge asks mayoral and Councillor candidates to keep rates increases (including levies) within an annual average rise no greater than 2%. Goff’s refusal to sign sends a clear message to ratepayers that they can expect more of the same Len Brown treatment they have endured for the last six years of rates of rises up to 10%pa.

Even Len Brown was prepared to commit to 2.6% annual rises before the last election, though he proved unable to keep his promise. That Goff will not give any assurance to ratepayers about future rates rises will sound alarm bells among our 16000 members and to all Auckland ratepayers about what they can expect under a Goff mayoralty.

Goff has already signalled a high spending agenda of support for the City Rail Link ($5billion), a new light rail link to the airport (as yet undisclosed but likely to be in the region of $2 billion), moving the Ports of Auckland (between $5 and $8 billion), and support for a waterfront stadium ($1billion). When we pressed him on how he would fund these projects his answer was that government must come to the party.

The government has yet to commit to the City Rail Link despite Brown’s recklessness in pressing ahead leaving ratepayers vulnerable to picking up the entire tab. It is unlikely Goff will be any more successful at persuading government than the hapless Len Brown. Goff's agenda is even more recklessness than Brown's and, if the Government doesn't come to the party, there will only be one source of finance, the ratepayer.

Goff talked about making the bureaucracy more accountable but would not commit to cutting staff numbers. He talked about committing ratepayers’ money towards the plight of the homeless, the provision of social housing and other social agendas more appropriate to government policy and taxes rather being core Council business. We reminded him that spending on core Council services such as roads, parks and waste collection were being neglected while Council’s culture of waste continues unabated and suggested, respectfully, that he should first concentrate on those neglected areas.

What was abundantly clear from the meeting is that Goff will use ratepayers’ money to further a Socialist agenda. He is good at talking up more accountability and cutting out the culture of waste in Council but is short on details of how he will achieve it.

It is disappointing that Goff will not sign our ratepayers’ pledge. His failure to do so will leave room for other candidates to send a strong message to ratepayers that it is they who can be trusted to take action on behalf of ratepayers to ensure reasonable rates and sensible spending by signing the ARA pledge.