You will recall our proposed advert below which we proposed to run as double page spread in the Herald on Sunday. The Herald’s publishers got cold feet and delayed, and eventually rejected it for publication

No matter we thought – Stuff (publishers of the free local papers) told us they were happy to publish the advert. They even ran it past the Advertising Standards Authority which gave our Town Hall Rich List advert the green light.

So we were amazed when, again at the very last minute, Stuff too pulled the plug! The Council is too big an advertiser to jeopardise. 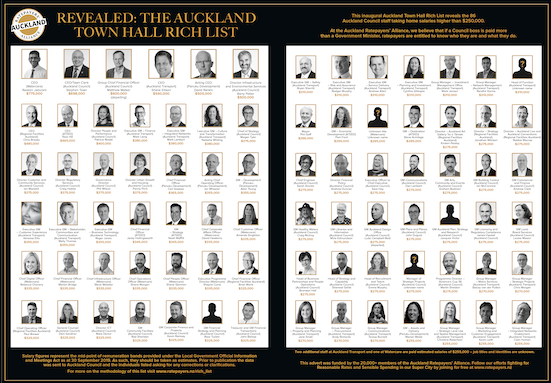 Morally obligated to spend the money we’d fundraised for advertising the Town Hall Rich List on advertising, we hoped to tell you this week that we were buying a billboard right outside the Council’s offices in the CBD.

But now we discover the extent of the skulduggery of Auckland Council. We were told last night that the Mayor’s Office has been calling around billboard companies demanding that our Town Hall Rich List billboards are not put up!

According to the industry association, the Council has never objected to an advertiser in this way. Clearly our Rich List got under Phil Goff’s skin!

I don’t know about you, but frankly I am appalled that the Council is using my ratepayer money to bully newspapers, and now billboard owners, so as to prevent us telling the public how the Council spends our money!

What next? Will Phil Goff fly one of his highly paid staffers to Silicon Valley to demand Mark Zuckerberg ban our Facebook adverts too?? Already, the Town Hall Rich List has had 17,000 shares, comments, and reactions on Facebook.

Here’s the mock-up of one of the proposed billboards:

Phil Goff’s spin doctors are telling media companies that ‘most of the information in the Rich List is incorrect’. But we know for sure that isn’t true! The Council’s own audited financial information shows that there are 86 people paid more than $250,000. And even if we have the identities wrong for one or two of the 86 people, why haven’t we had a single person contact us to say that they were incorrectly put on the list?!

And if we are so wrong, why won’t the Council point to an error? It says a lot that the Mayor's Office is using such underhand tactics to try and undermine this effort. It shows the Council is really feeling the pressure. Good.

How we’ll fight back for you

Later this week our steering group is meeting to decide how to best get the message out. We’re still looking at other billboard options, letter drops, Facebook advertising, and combinations of all three. I’ll let you know once we’ve got everything lined up.

In the meantime, to chip in to our fighting fund to hold the Council to account for how it spends our money click here.