We’ve made it easy for you to be heard on the 10-year budget. 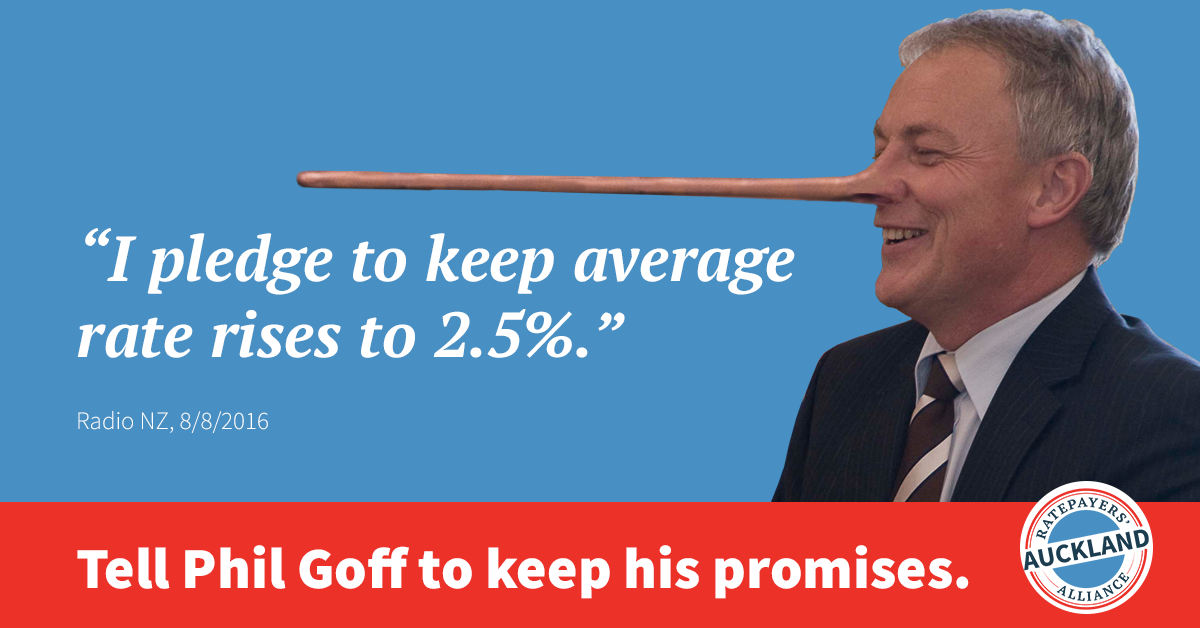 Eighteen months ago, Aucklanders elected Phil Goff on a platform of tackling wasteful Council spending, ‘doing more with less’, and capping rates rises to 2.5% per year.

Despite those promises Mr Goff has now proposed a 10-year budget (also known as the "Long Term Plan") that locks in general rate rises of at least 3.5% in eight of the next ten years.

In addition, the Mayor wants:

Despite being elected on a platform to limit rate hikes, Phil Goff is now saying that only applied to "general rates".  He's sneakily trying to get around his election 'pledge' by inventing new "targeted rates" such as his proposed ‘natural environment targeted rate’ - which applies to every ratepayer!

An 11.5cent per litre fuel tax sets the Council up to dig even deeper into our pockets. According to the AA the fuel tax will cost, on average, $135 per year - much more than Len Brown's 'transport levy'. For larger families, or ones who commute from outer suburbs, the amount is likely to be even greater.

What's worse, it is not even guaranteed that the money raised by the fuel tax will be used for roading! Unless we act now, it may very well end up paying for cycleways and light rail trams.

At the same time the Council is consulting on the 10-year budget, it is also trying to sneak through a new Auckland-wide waste management system that will cut general rubbish collection to a fortnightly service. Our economist has uncovered that while the new planned services 'standardise' kerbside waste services across Auckland, they do so at an enormous increase in costs and result in a reduced service.  As an example, the Council is proposing a new costly food scraps pickup scheme, that all ratepayers will be paying for, even if you don't use it.

All this extra revenue could be justified if the Council or Mayor had followed through on their promises to cut wasteful spending, finding the efficiencies Mr Goff promised, and directing the savings into infrastructure spending. But the documents show that none of this is happening.

Submissions are due in just five days - have your say now.

The good news is that we have made it easy for you to be heard. We have had an economist, working with our researcher, read the lengthy documents involved and write a submission targeting the issues named above.

You can read our full submission here.

We've made it easy for you to make a submission on any (or all) of the issues above.

--> Click here to submit on the Council’s failure to tackle wasteful spending and the plan to break pre-election promises on rates.

--> Click here to submit against the proposed regional fuel tax.

--> Click here to submit on the proposed Auckland-wide waste management system which will see refuse collection halved for most Aucklanders.

Every submission counts to send a message to Council that they need to provide value for money to ratepayers, and deliver on the Mayor’s promise of doing more with less.