The Auckland Ratepayers’ Alliance is pleased to present the inaugural Auckland Town Hall Rich List, revealing the names and salaries of the highest-paid staff at Auckland Council and its subsidiaries.

This is an exercise in transparency and accountability. If someone is paid more than a Government Minister, ratepayers should at the very least know who they are and what they do.

Research for the Rich List was undertaken in cooperation with the New Zealand Taxpayers’ Union, who ultimately plan to publish Rich Lists for councils across the country – a practice undertaken in Britain since 2007 by the UK TaxPayers’ Alliance.

The UK Rich List makes for interesting comparisons. Essex County Council, which has a population similar to Auckland – about 1.4 million – pays 28 staff salaries higher than NZ$250,000, compared to Auckland Council’s 86.

The bureaucrats named in our list aren’t just well-paid – they enjoy a level of job security that insulates them from the current pressures facing Aucklanders who fund these high salaries through rates and levies, irrespective of their ability to pay.

Compiling this list was not easy. The Council and its CCOs preferred to provide remuneration ‘bands’ rather than exact salaries, so we have used the midpoints of these bands. The CCOs also refused to provide exact job titles, meaning some extrapolation was required to match names with salaries. The methodology at the end of this report explains further.

So, while we would prefer the Council to publicise this kind of information itself with more detail, we are releasing our best effort now in the hope that it will spark debate within the public and around the Council table.

The release of the Rich List comes as ratepayers’ livelihoods are threatened by the fallout of COVID-19. Despite this, Auckland Council is considering yet another rate hike of 2.5 or 3.5 percent. Our message to the Mayor is to look at costs within council before squeezing ratepayers during an economic crisis.

We welcome early reports of salary cuts planned for Council CEOs, but the Town Hall Rich List demonstrates these cuts can and must go far deeper.

Here's a condensed version of the Town Hall Rich List we plan to run as double-page newspaper adverts across Auckland. Click here to view the list in full resolution. 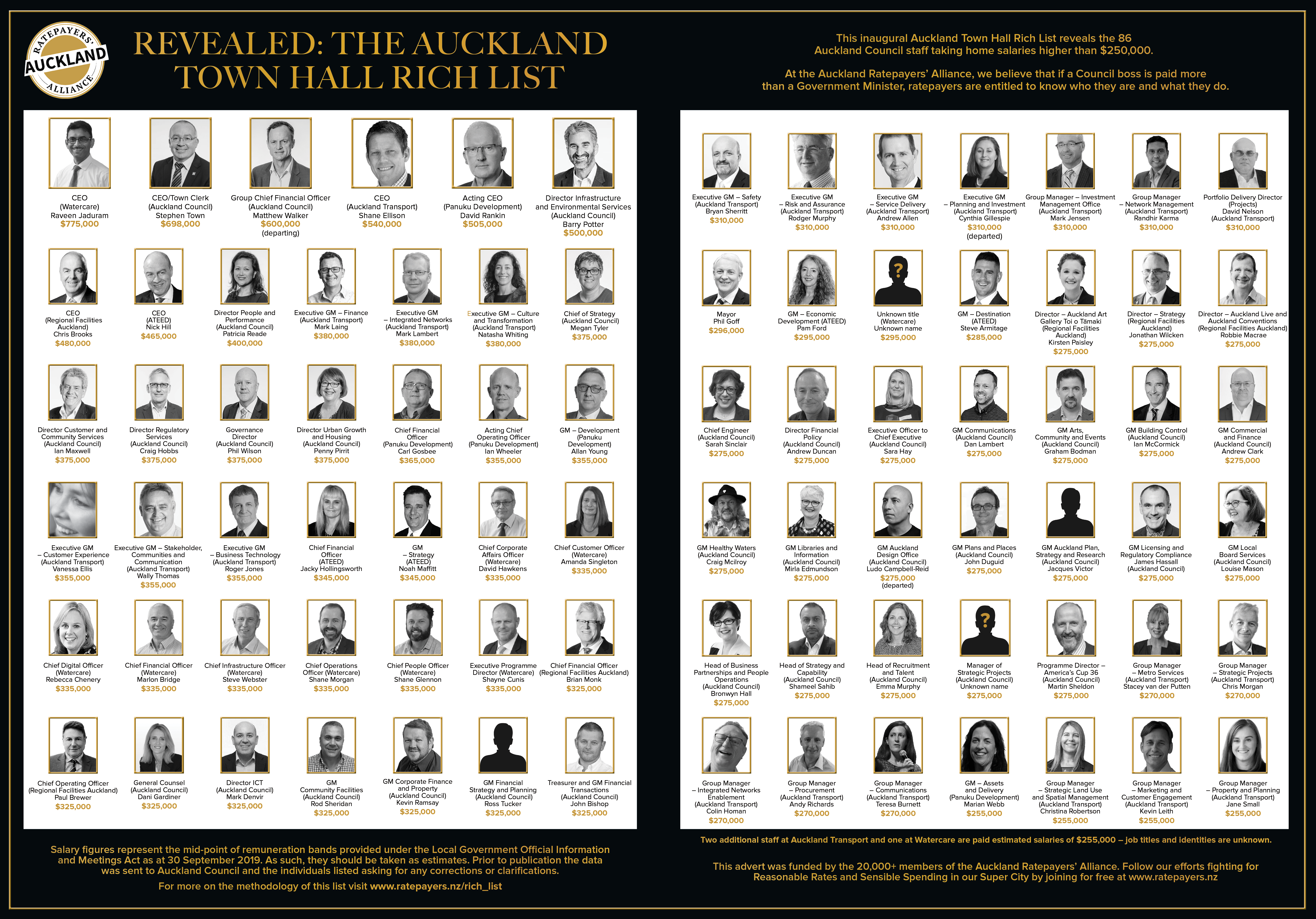 This effort was made possible by our 20,000+ members and generous donors across Auckland who share our mission for Reasonable Rates, Sensible Spending in our Super City. Click here to receive our updates, or here to chip-in to the campaign.