Together we defeated the Taniwha Tax 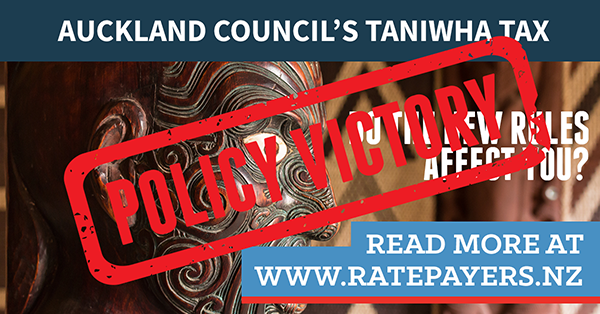 The most significant victory to date for the Ratepayers’ Alliance!

Yesterday, the Independent Hearings Panel, which was tasked with reviewing all aspects of the draft plan, reported back.

The Panel has recommended that all of the provisions we cited – the cultural impact assessment requirements and the 3,600 ‘sites of value’ be deleted from the plan!

The Panel completely rejected the Council’s recommendations for even more onerous requirements relating to Cultural Impact Assessments (the Council wanted to require these for all consents near the sites, rather than just those where a Mana Whenua group believe their cultural values are impacted).

How we did it

This win shows the value of our campaigns. Along with the campaign exposing the Council publicly (and building popular opposition) we joined with the other groups to oppose and fight the provisions behind the scenes.  We succeeded because we ensured the politics supported the rational arguments being made to the Independent Panel.

Here is a summary of the relevant report by the Panel. In short, it not only picks up our joint recommendations, it goes further and confirms what we suspected all along: Auckland Council never bothered to verify whether the sites were indeed valuable; or that they even existed.

Assuming the Councillors adopt the Panel’s recommendations (though the legislative framework makes it hard for them not to) the Taniwha Tax is dead!

The Panel’s recommendations provide for an estimated 422,000 new houses over the next 30 years. 270,000 will come from within the existing urban boundary and 152,000 in areas currently outside the boundary.

In terms of the changes the Council tried to sneakily slip in at the last minute – the changes that proposed intensification for areas which were never consulted on the proposals – the Panel appears to have compromised. We are still taking advice and working through the detail.

Who decides from here?

Later today Councillors will decide whether the final Unitary Plan votes will be conducted by the Council, or delegated to the Development Committee – i.e. Councillors and unelected members of the Independent Maori Statutory Board together. Given that these planning decisions are the most important the Super City has made to date we’re backing Democracy Action's call for all of those voting having a democratic mandate.

Either way the final decisions have to be made by 19 August, with the appeal period (on points of law only) expiring on 16 September.

You can access the Panel’s reports and recommendations here and the recommended zoning maps here.

Our work relies on people like you joining, and supporting our work.  Make a donation to our work can continue, our voice grows stronger, and so we can deliver more wins for Auckland ratepayers.