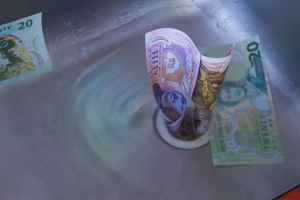 Auckland Council has spent tens of thousands of ratepayer dollars sending leaflets to nearly 100,000 households in Rodney and Albany to notify residents of changes to Council rubbish collection days despite the Council not having any refuse collection in the area.

Local Government is supposed to be about providing good services to the local community. Council officials must be so tied up in their Albert Street ivory tower that they don’t even know where their own rubbish trucks go. They wrote to householders to notify a change to services that don’t even exist.

Auckland Council provides only recycling collection in the areas that used to be in the Rodney District Council, with householders contracting with private providers to dispose refuse.

Last month, we highlighted that proposed changes will see those north of the Harbour Bridge pay up to two times more for household rubbish collection. So far those Councillors in the affected wards of Albany and Rodney appear to have done little but sit on their hands.

This is the leaflet which tells Rodney and Albany residents their rubbish collection day is chaning (it is isn't).