Earlier in the week submissions closed on Auckland Council's Annual Budget - the document which sets rates for the financial year beginning in July (our submission is available to read here).

We sent in our submission and asked to present in person to Councillors, as has been common in the past. One of the issues the Council will be considering is Phil Goff's proposal to increase the wages of the Council and impose a "living wage" for all staff. We had lined up an expert labour economist who used to work for the Department of Labour to present to Councillors.

We've now discovered that to avoid having to listen to ratepayers, Councillors resolved not to allow people to submit in person on this year’s budget. They didn’t even want us – New Zealand’s largest ratepayer group - to present. They said ratepayers are not a ‘key stakeholder’.

"We'll decide what your rates are, but we don't want to hear from you" — Auckland Councillors

Councillor Daniel Newman proposed an amendment to Mayor Phil Goff’s consultation plan. This is what is recorded in the Council minutes: 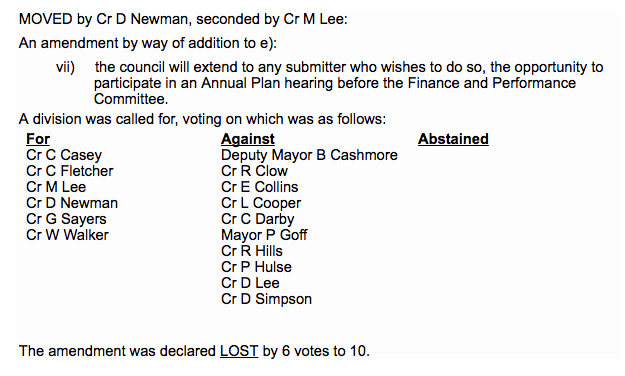 Councillors voted to only hear from their own group of "sock puppet" organisations like the Property Council (which the Council uses our money to fund).

We wrote to the Finance Committee Chair Councillor Ross Clow asking what sort of consultation involves only inviting hand-picked parties to present to Councillors before submissions even close. You can read our letter here.

As explained in the letter, what the Council is doing is probably illegal. But Councillors know that by making sure that it hears from those most likely to mount a legal challenge, they can avoid the bad publicity of having ratepayers tell them what they think about yet another year of rate hikes many times the level of inflation.

If you agree that Councillors should be hearing from ratepayers and not just the Council's hand-picked elite, please take a moment to email those Councillors who voted to stop you having your say on your rates bill.

Click here to send an email to the Councillors who blocked ratepayers from having a say.