This morning, the NZ Herald published the headline results from our August mayoral poll - and now we’re releasing the full report exclusive to our supporters.

According to the Ratepayers’ Alliance/Curia Poll, Labour-endorsed candidate Councillor Efeso Collins (Manukau) remains the front-runner with 22.3% of the decided vote.

Given the margin of error we must stress that even those candidates in third or fourth place could still win. But this poll confirms that Collins, with the backing of Labour and the Greens, maintains a strong advantage over his rivals. 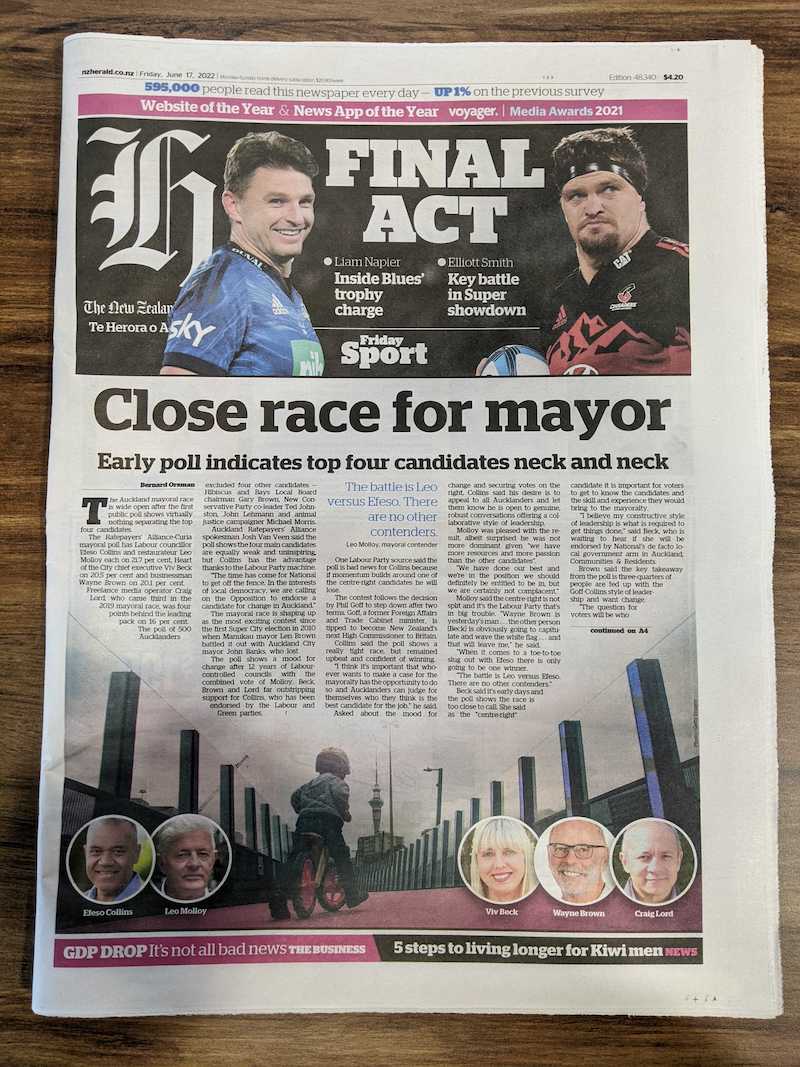 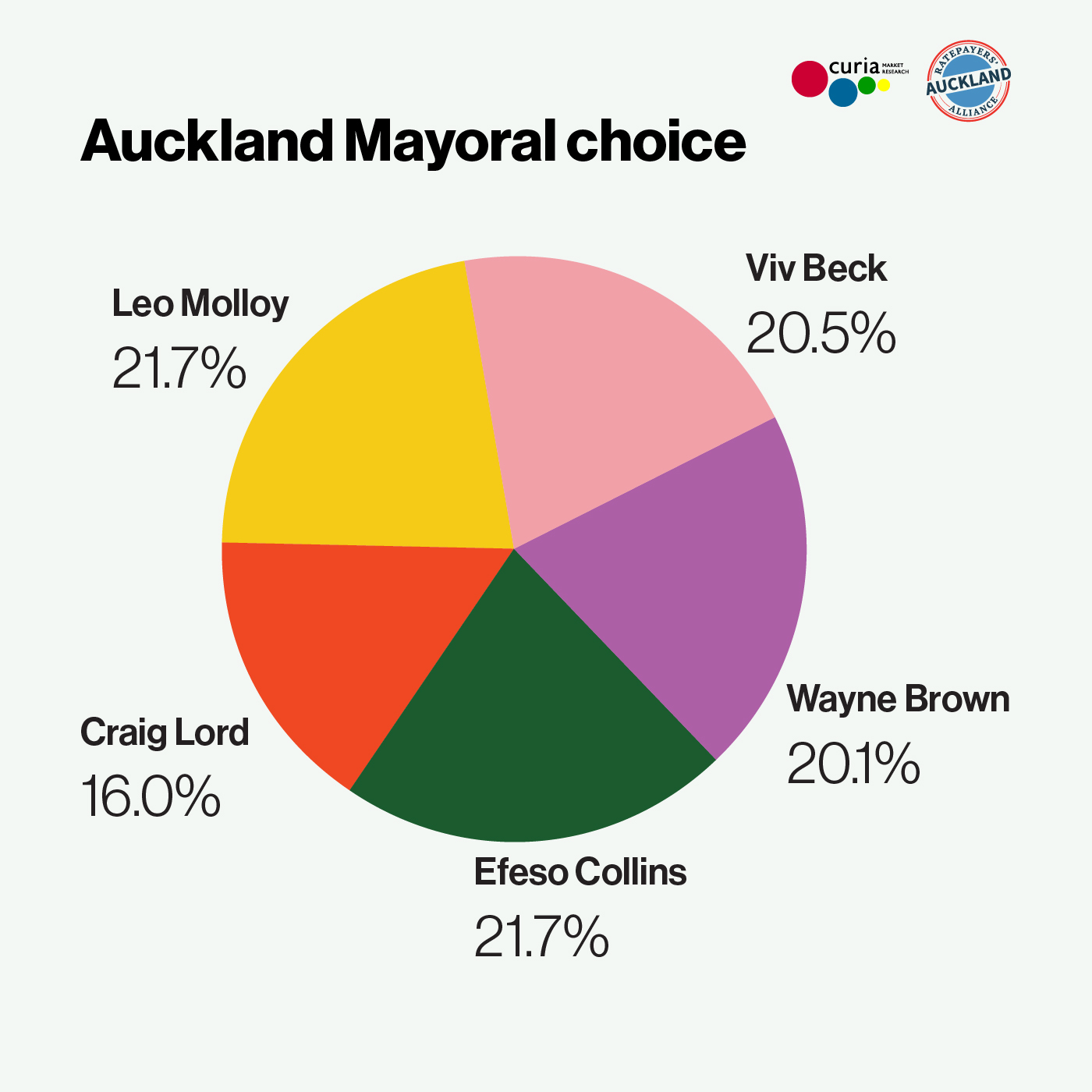 As I told the NZ Herald, "The time has come for [the National Party] to get off the fence. In the interests of local democracy, we are calling on the Opposition to endorse a candidate for change in Auckland".

With too many 'change' candidates running, the lack of leadership by National could see a continued high-spending, high-rates, Mayor for Auckland. Ratepayers deserve so much better...

The middle of a cost-of-living crisis isn't the time to pile on new costs for ratepayers. But last week, that's exactly what a majority of councillors voted for.

Councillors voted to endorse Mayor Goff’s billion-dollar Climate Action Plan – a plan that will see the average rates bill go up by 5.7%!

To our disappointment, one of the enthusiastic backers was Councillor Desley Simpson (Ōrākei ward), who is Mr Goff's Finance and Performance Committee Chair. She even asked the Mayor a series of ‘patsy’ questions to justify her support! 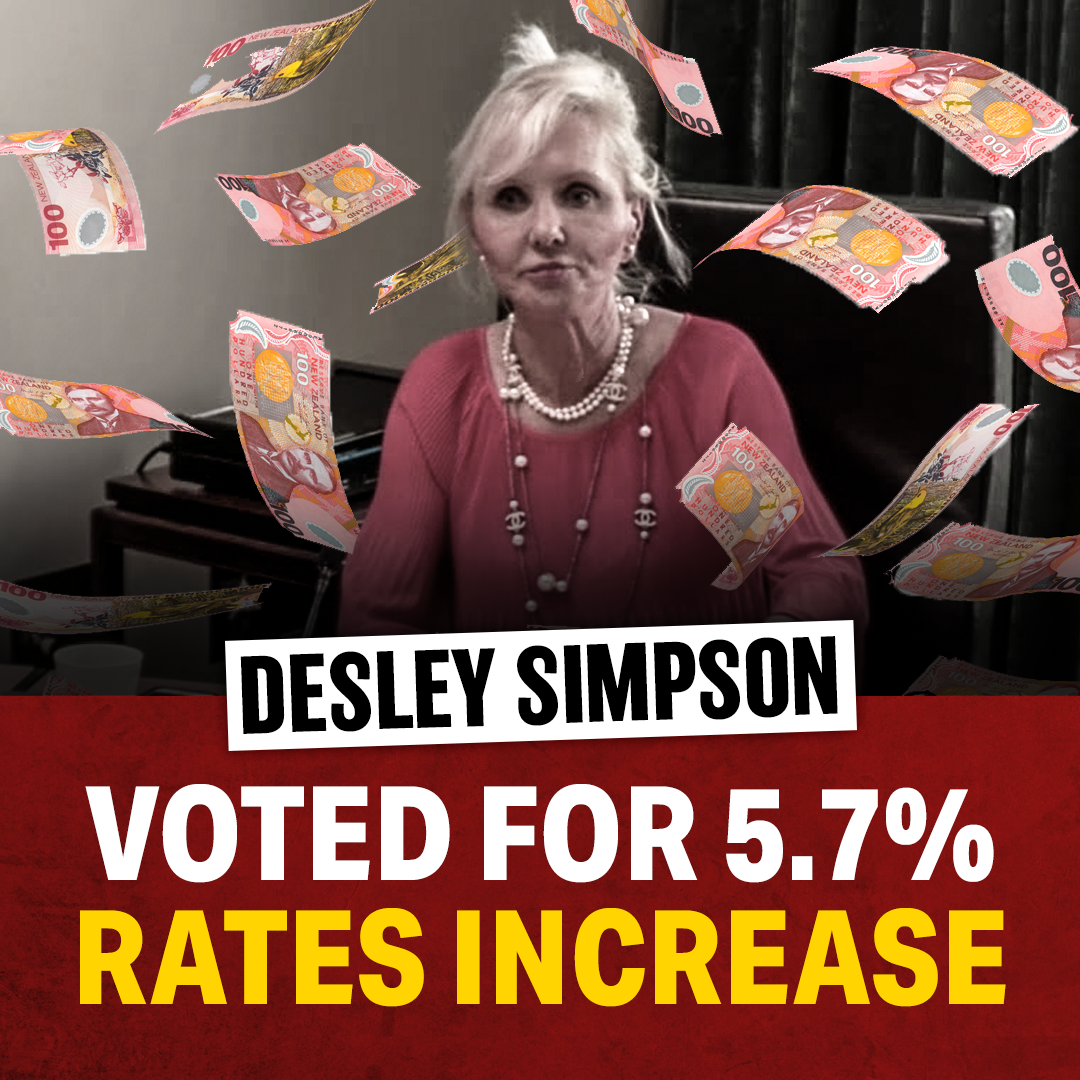 Desley Simpson wasn't the only councillor who claims to stand for ratepayers but voted in support of the so-called 'targeted rate'. But we're highlighting her voting record as she was the only "Citizens and Ratepayers" councillor to support Mr Goff's new rate.

Alongside the Goff-aligned councillors, Cr Simpson ignored the 1500+ people who used our online submission tool and the many others who wrote in to tell the Council that now is not the time to lean into new spending initiatives.

And we know the message was received loud and clear. During the 5-hour debate, several councillors acknowledged your humble Ratepayers’ Alliance. Mayor Goff resorted to misinformation tactics – calling Auckland's largest ratepayer group, a ‘fringe element’! Clearly, we got under his skin...

But in the end, only two councillors had the courage to make a stand against the Climate Action Targeted Rate. Councillor Daniel Newman (Manurewa-Papakura) and Councillor Greg Sayers (Rodney) both went on the record to oppose Goff's greedy $57 million a year climate change revenue grab.

On the adoption of the overall budget, this is how they voted: 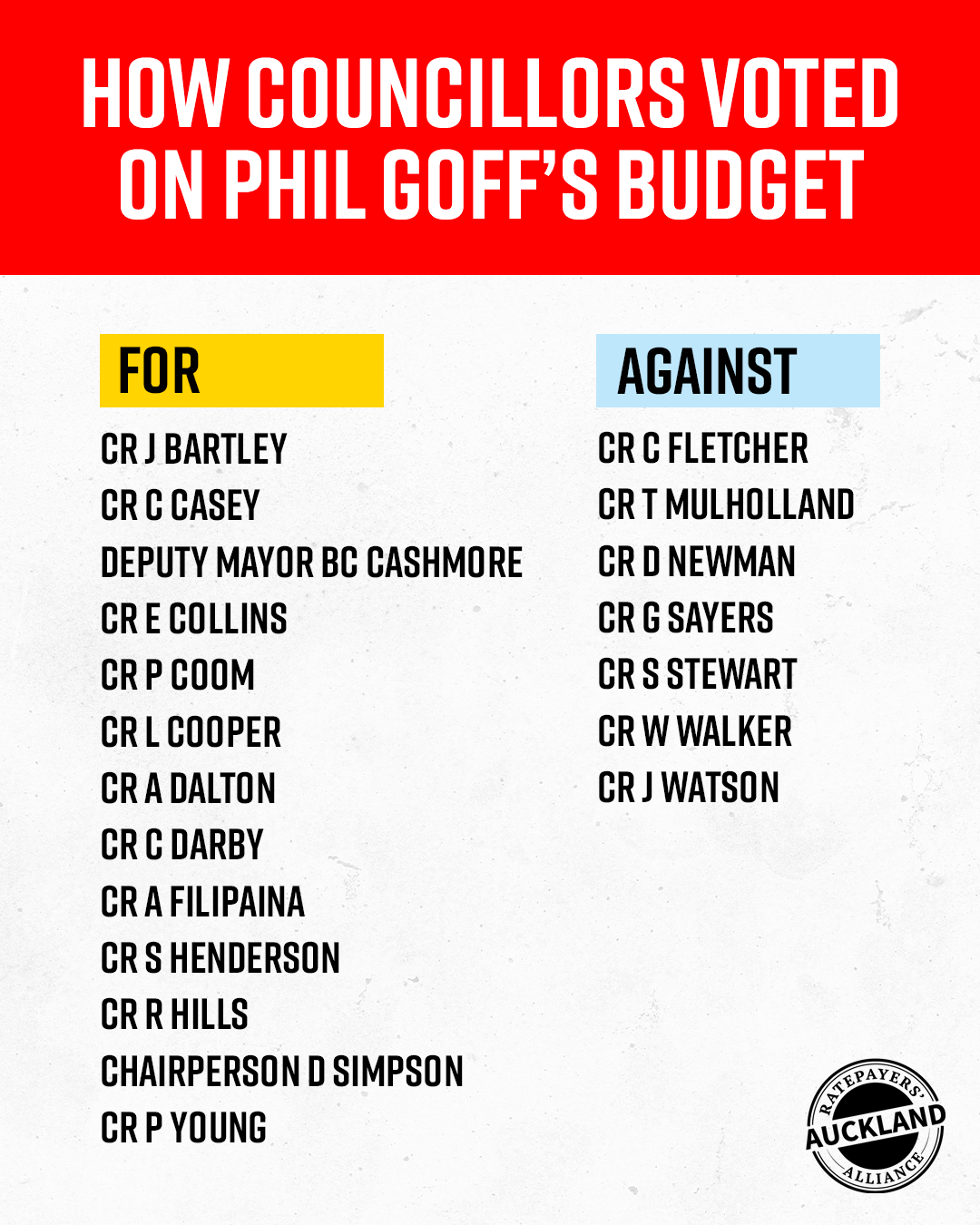 There is still one last vote on this year's Council budget. We are urging supporters to contact their local councillor ahead of the vote and tell them why the Climate Action Plan must be opposed.

Aucklanders agree: Now is not the time to hike costs 📈

Auckland Council claims there is broad public support for a Climate Action Targeted Rate. However, our poll found that a majority of Aucklanders oppose the new rate. 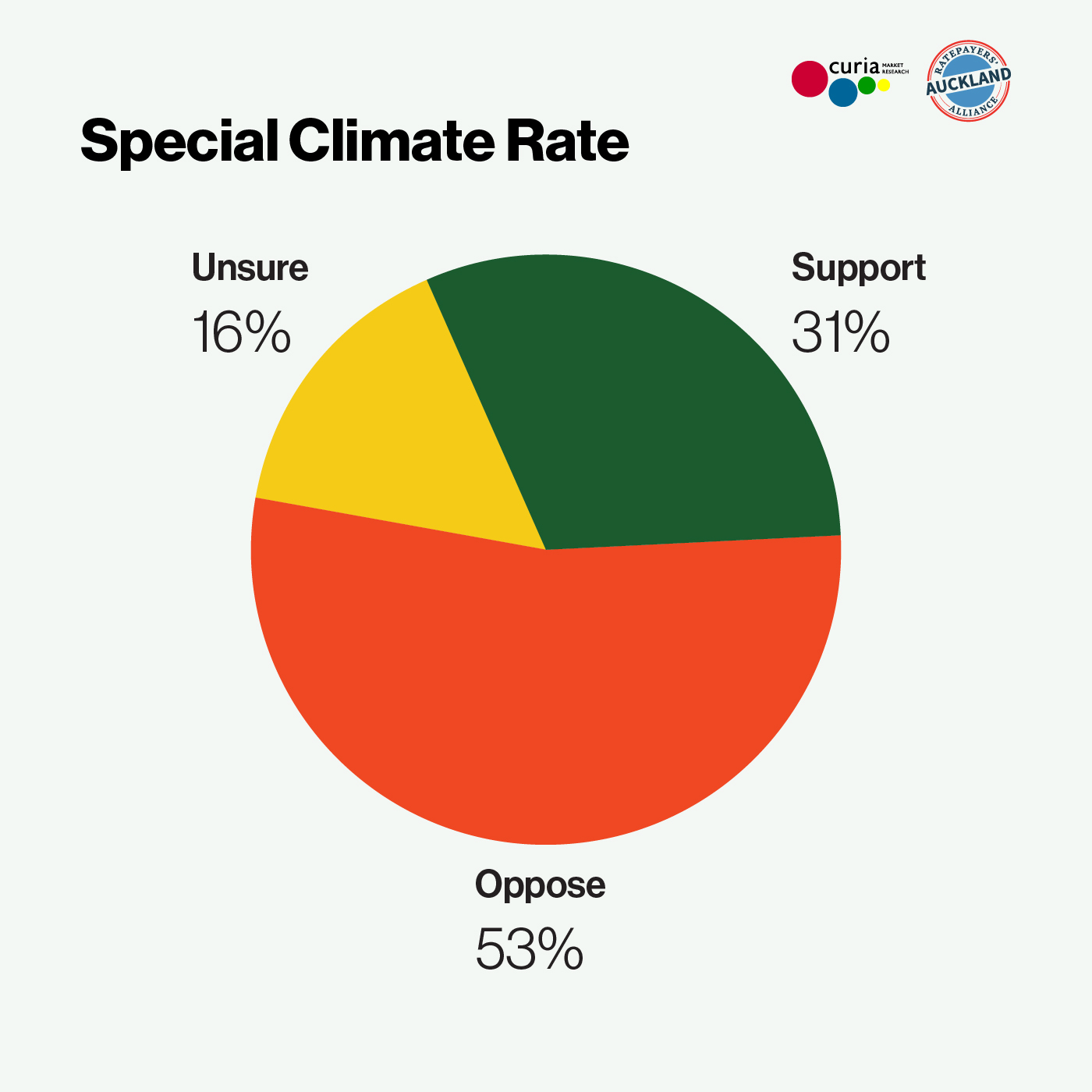 You make this possible

The Auckland Ratepayers’ Alliance/Curia poll is the only public poll of the Auckland mayoralty to be released in 2022. We hope to bring you one further poll before voting opens on 16 September, so that you can make an informed decision.

But we can’t do it without you – please consider making a donation to support our mission of reasonable rates, sensible spending and more transparency in the Super City.