The report Auckland Council don't want you to see

Over the last few weeks, your humble Ratepayers’ Alliance have been in a battle with the Council over a report our researchers have been preparing: the ‘Auckland Town Hall Rich List’ naming the 86 – yes 86! – Auckland Council bosses paid more than a quarter of a million dollars.

Here's a flavour of the top Town Hall Rich Listers… 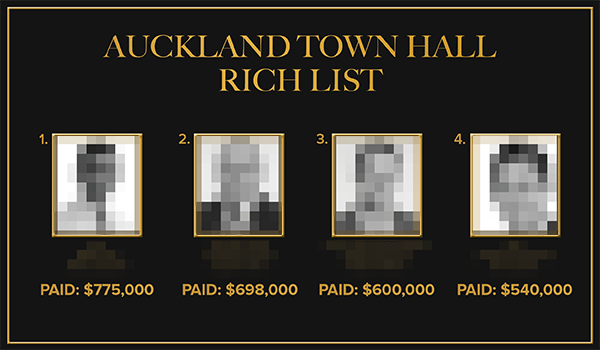 To put that in context, if the Minister of Employment, Hon. Willie Jackson, was paid by Auckland Council his remuneration would be too low to put him on the list.

If Auckland Council officials are going to be paid more than Ministers in Wellington, at the very least we should know who they are and what they do! After all, it is our ratepayer money they’re paid with.

But not according to Auckland Council. You see, the Council is going to extraordinary lengths to prevent us from publishing the report. The Mayor’s office is ringing around the media demanding that no one cover it, are getting their favoured journos to try and rubbish our efforts in advance of publication1, and now we understand they are even calling in the lawyers!

Think about that for a moment. Auckland Council are using your money to prevent you being told where your money is going.

Copied below is our most recent letter to the Council’s CEO – so you can judge for yourself.

Help us defend your right to know

No wonder Auckland Council don’t want the report published. It demonstrates just how overpaid the Council’s fat cats are. And unlike everyone else, no one working at Town Hall is worried about losing their jobs right now.

The Council says that our report is “an unacceptable intrusion into the privacy” of council bosses. We say that once you are pocketing more than a Cabinet Minister, ratepayers have the right know about it.

Every Auckland ratepayer should know where their money is going. If you agree, donate today to ensure the Council can’t keep this secret.

Only with sunshine can we disinfect Auckland Council’s bloated bureaucracy.

We acknowledge your letter regarding the imminent publication of our Auckland Town Hall Rich List.

Last week our staff emailed the individuals listed on the Rich List.  We asked them to correct or clarify any of the information as it pertained to them. To date, none have contacted us to object to the publication of the information – indeed, I understand you responded by email with a minor correction to your own information.

Our researchers put together the Rich List based on official information responses provided to us by the Council and its CCOs, along with annual reports, and job title listings on Council websites and public social media. Some extrapolation was required to match names with salary bands but in most cases this could be done with certainty. If we can do it, anyone can. It is merely presenting public information in a more effective way. We simply added the extra step of asking those listed for verification.

So we totally reject your assertion that the Rich List is an “unacceptable intrusion into [the] privacy” of the individuals listed. These aren’t frontline or lowly paid anonymous staff. Without exception, those listed are in senior positions paid $250,000 or more per year – more than many Ministers of the Crown, and Chief Executives of some government agencies.

In addition, the marginal impact on privacy with public disclosure that an individual is paid between $300,000 and $320,000 (as is already the case) and a precise figure of say $309,571, is slight. This is the point in our reference to the earlier Ombudsman decision.

Around three years ago, we made similar submissions to WaterCare in regard to a request for precise remuneration of its senior executive team. We could use mid-points within salary bands and judgements based on seniority of staff and relative positions. We asked Water Care for the precise amounts. No member of WaterCare’s senior management group objected, and we were provided the precise amounts.

Rather than genuine concerns for privacy, we fear that your strong reaction is more likely explained by the political embarrassment Auckland Council must have in the share volume of staff on such high salaries. That is understandable. But we make no apology for publishing the collated information with full knowledge that many ratepayers will be outraged at what it shows.

This sort of scrutiny should be expected.  In Britain this debate is settled – our sister group, the UK TaxPayers' Alliance has been publishing its own Town Hall Rich List annually since 2007, and the sky has not fallen.

In Britain, public disclosure of specific salary information for highly paid employees was essential for gender equality groups to expose differences in gender pay at public sector organisations.  Without these sorts of efforts, the public outcry and corrections of the enormous pay disparities between male and female hosts working for the BBC would never have occurred. We are aware of separate efforts to uncover this sort of information for similar purposes in New Zealand. I understand Auckland Council has resisted those efforts too.

You will recall that there was strong reaction the first time we published our local government league tables, Ratepayers’ Report. Reactions within the sector even saw the President of your peak body, Dave Cull, emotively describe the Taxpayers’ Union as untruthful in public comments about the league tables – an allegation he later withdrew, apologised for, and made a significant payment to the Taxpayers’ Union in relation to.

Now that the dust has settled, councils around New Zealand use our annual league tables to benchmark performance and Stats NZ has adopted aspects of our research methodology on residential rates for the purpose of CPI calculations.

As with the league tables, we have provided the draft Town Hall Rich List data to Auckland Council for verification and feedback. If it's not accurate, then work with us to improve it - or accept that your lack of transparency forces us (and all ratepayers) to make extrapolations and informed guesses.  If it has errors (in particular if we have misidentified a staff member) tell us the specifics, so we can correct the report immediately.

But we are not going to hold off publication because of faux outrage, or vague claims that we have something wrong.

Without exception these individuals are paid more than many government ministers. They enjoy job security greater than just about every employee in the private sector right now. Their generous salaries are funded by the ratepayers we represent. Even your letter acknowledges an acceptance that there is a degree of public interest in transparency and accountability for the value the Council attributes to the carrying out of senior roles. Our report does little more than collate publicly available information on those values.

If you wish to provide clarification of the amounts (or, at least, inform your staff that they are permitted to engage with our researchers should they wish) please ensure we receive the information before mid-day Friday. We will be publishing shortly after that.